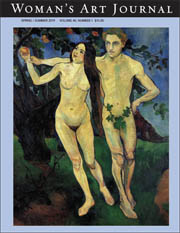 13 Leonor Fini and Dressing Up: An Act of Creativity
By Rachael Grew

21 The Art of Pan Yuliang: Fashioning the Self in Modern China
By Sandy Ng

40 Fanny Palmer: The Life and Works of a Currier & Ives Artist By Charlotte Streifer Rubinstein, Edited by Diann Benti
Reviewed by Betsy Fahlman

51 Charlotte Salomon: Life? Or Theatre? A Selection of 450 Gouaches
Essays by Judith C.E. Belinfante & Evelyn Benesch;
Charlotte Salomon and the Theatre of Memory By Griselda Pollock
Reviewed by Judith Zilczer

61 “I’m Not Myself at All”: Women, Art, and Subjectivity in Canada By Kristina Huneault
Reviewed by Carolyn Butler Palmer

62 The Art of Feminism: Images that Shaped the Fight for Equality, 1857–2017 Edited by Helena Reckitt
Reviewed by Jessica Holmes