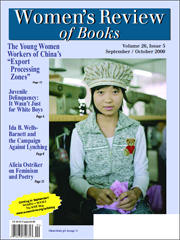 p. 3
Whose Culture Is It, Anyway? Culture Keeping: White Mothers, International Adoption, and the Negotiation of Family Difference By Heather Jacobson
Lucky Girl By Mei-Ling Hopgood
Reviewed by Martha Nichols

p. 6
Girl Delinquents The Woman in the Zoot Suit: Gender, Nationalism, and the Cultural Politics of Memory By Catherine S. Ramírez
Reviewed by Miroslava Chávez-Garcí

p. 8
Woman of Valor To Tell the Truth Freely: The Life of Ida B. Wells By Mia Bay
Ida: A Sword Among Lions: Ida B. Wells and the Campaign against Lynching By Paula Giddings
Reviewed by Sherrilyn A. Ifill

p. 11
Striving for Realness Kinship by Design: A History of Adoption in the Modern United
States By Ellen Herman
Reviewed by Barbara Melosh

p. 13
Anomie in the New China Factory Girls: From Village to City in a Changing China By Leslie T. Chang
Reviewed by Xujun Eberlein

p. 17
Good Reads Lost and Found
The Confessions of Noa Weber By Gail Hareven
Mrs. Somebody Somebody By Tracy Winn
Come Sunday By Isla Morley
Reviewed by Trish Crapo

p. 21
A Tree Putting Forth Green Leaves Poems from the Women’s Movement Edited by Honor Moore; Love Belongs to Those Who Do The Feeling: New and Selected Poems (1966-2006) By Judy Grahn
Reviewed by Alicia Ostriker

p. 23
A Failure of Understanding Sex Trafficking: Inside the Business of Modern Slavery By Siddarth Kara
Reviewed by Melissa Hope Ditmore

p. 26
Touched by Grace The Vagrants By Yiyun Li
Reviewed by Mako Yoshikawa

p. 28
Temper, Mind, and Mouth The Other Side of Paradise By Staceyann Chin
Reviewed by Heather Seggel