Note: The next issue of Women’s Review of Books is delayed due to editorial transition. Volume 39, Issue 1 is expected to be published in May/June. 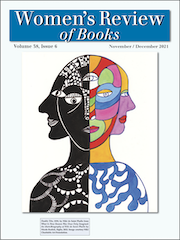 Aims and Scope
Women’s Review of Books (WRB) began publishing in October 1983, with a goal of spreading the news about the scholarship emerging from the then new field of women’s studies and about creative writing—fiction, memoir, poetry—that examined women’s experiences. At the time, it was just about possible for WRB to cover every book that fit under these broad guidelines; and it was not always easy for those interested in such writings to track them down. Mainstream book review publications, newspapers, and even scholarly journals did not cover them; a network of women’s and gay bookstores was just emerging; and of course there was no Internet. Feminist and gay publications came and went and often did not devote much space to book reviews. WRB became essential reading for feminists.

Using seed money she raised from friends, women’s studies faculty members, and other feminists, founding editor Linda Gardiner produced an inexpensive, tabloid-format monthly. From the very first issues—which included reviews by such writers as Evelynn Hammonds, Karla Jay, Ann Snitow, Michele Wallace, Heidi Hartmann, Marge Piercy, and Cynthia Enloe—just about every significant feminist writer and scholar in the U.S. contributed at some point to WRB. The publication found its home at the Wellesley Centers for Women (WCW) and WRB became the resource that women turned to, knowing they could find in-depth, original, thought-provoking discussion of the issues of the day. Subscription and advertising income supported the publication.

Women’s Review of Books celebrated its tenth anniversary in 1993 with a conference keynoted by Margaret Atwood. However, starting in the mid-1990s, WRB’s readership began to decline. The many reasons for this included economic cutbacks that caused libraries and individuals to limit the number of subscriptions they took out; the Internet, which was making it easier to find out about books of interest to women; and changes in the women’s movement itself, so younger readers did not find WRB’s coverage as exciting and relevant as their mothers had. WCW had subsidized the production of WRB for many years, but after operating at a deficit for so long, Women’s Review of Books suspended monthly publication in December 2004.

Despite the discouraging financial picture, the staff at WCW and WRB were convinced that the Women’s Review of Books continued to fill a need, and they explored every option they could to revive it. Studies showed that coverage of women’s writings in the mainstream media had not improved all that much in the 20-plus years since WRB was founded. A controversy over the dearth of women’s opinion writing in the Los Angeles Times and other major newspapers focused public attention on the silencing of women’s voices. By spring 2005, WCW had worked out an agreement with a small publisher in Philadelphia, Old City Publishing. OCP would take over all of WRB’s business functions: subscriptions, advertising, production, promotions, etc., while the editorial offices would remain, as always, at WCW. WRB would retain its traditional editorial independence and continue to present quality editorial content.

In January 2006, Women’s Review of Books was re-launched as a bimonthly publication, with a new, updated, reader-friendly design but with the same kinds of distinguished writers and eclectic, thought-provoking coverage as before. Subscribers and advertisers flocked back and the new structure has been both a financial and editorial success.