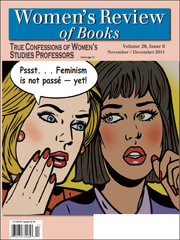 p. 3
But Are They Any Good? True Confessions: Feminist Professors Tell Stories Out of School Edited by Susan Gubar
Reviewed by Audrey Bilger

p. 6
The Economy of Shame Microfinance and Its Discontents: Women in Debt in Bangladesh By Lamia Karim
Reviewed by Ghazal Zulfiqar

p. 10
The Hysteria Capital of the World Medical Muses: Hysteria in Nineteenth-Century Paris By Asti Hustvedt
Reviewed by Rosalind Delmar

p. 15
Good Reads What The Dead Would Have Wanted
So Good in Black By Sunetra Gupta
Elegies for the Brokenhearted By Christie Hodgen
An Atlas of Impossible Longing By Anuradha Roy
Salvage the Bones By Jesmyn Ward
Reviewed by Trish Crapo

p. 21
“I Like Me Black Face and Me Kinky Hair” Una Marson: Selected Poems Edited by Alison Donnell
Reviewed by Erika J. Waters

p. 23
Discrimination in the Womb Unnatural Selection: Choosing Boys Over Girls, and the Consequences of a World Full of Men By Mara Hvistendahl
Reviewed by Amy Agigian

p. 30
Untangling the Marriage Knot Unhitched: Love, Marriage, and Family Values from West Hollywood to Western China By Judith Stacey
A History of Marriage: From Same-Sex Unions to Private Vows and Common Law, the Surprising Diversity of a Tradition By Elizabeth Abbott
Reviewed by Kristin Celello