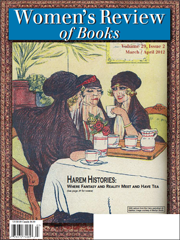 p. 3
Feminists of the Right and Left Before the Revolution: Women’s Rights and Right-Wing Politics in Nicaragua, 1821-1979 By Victoria González-Rivera
Reviewed by Florence E. Babb

p. 5
Poverty, Gospel, Revolution The Journey of a Tzotzil-Maya Woman of Chiapas, Mexico: Pass Well Over the Earth By Christine Eber and “Antonia”
Reviewed by Martha Gies

p. 7
The Adaptable Brain The Truth About Girls and Boys: Challenging Toxic Stereotypes About Our Children By Caryl Rivers and Rosalind C. Barnett
Reviewed by Susan McGee Bailey

p. 10
From War on Poverty to War on Poor People The War on Welfare: Family, Poverty, and Politics in Modern America By Marissa Chappell
Cheating Welfare: Public Assistance and the Criminalization of Poverty By Kaaryn Gustafson
Poverty, Battered Women and Work in US Public Policy By Lisa Brush
Reviewed by Annelise Orleck

p. 13
The Index of the Mind  The Politics of Fashion in Eighteenth-Century America By Kate Haulman
Reviewed by Kimberly Chrisman-Campbell

p. 18
From Sixteen Personalities to One Sybil Exposed: The Extraordinary Story Behind the Famous Multiple Personality Case By Debbie Nathan
Reviewed by Paula J. Caplan

p. 23
All Fur Coat and No Knickers The Forgotten Waltz By Anne Enright
Reviewed by Valerie Miner

p. 27
On With the Show Changed for Good: A Feminist History of the Broadway Musical By Stacy Wolf
Reviewed by Deborah Jannerson

p. 31
Open Up White Space Out on Assignment: Newspaper Women and the Making of Modern Public Space By Alice Fahs
Uncovering Race: A Black Journalist’s Story of Reporting and Reinvention By Amy Alexander
Reviewed by Carol Sternhell