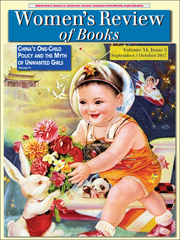 p. 3
Determinedly Optimistic Staying With the Trouble: Making Kin in the Chthulucene By Donna J. Haraway
Reviewed by Kelly Alexander

p. 10
The Woman Who Broke the Comedy Club Cellar Ceiling Last Girl Before Freeway: The Life, Loves, Losses, and Liberation of Joan Rivers By Leslie Bennetts
Reviewed by Kate Clinton

p. 11
Not Quite Gone The Disappearing L: Erasure of Lesbian Spaces and Culture By Bonnie J. Morris
Reviewed by Jen Manion

p. 13
The Persona That Became a Reality Indomitable: The Life of Barbara Grier By Joanne Passet
Reviewed by Susanna J. Sturgis

p. 18
Good Reads Those Who Wait Outside the Door By Trish Crapo

p. 24
The Journey into the Unknown The Dark Flood Rises By Margaret Drabble
Reviewed By Valerie Miner

p. 25
Does the Sex Offender Exist? Sex and Harm in the Age of Consent By Joseph J. Fischel
Reviewed by Sara Matthiesen

p. 29
Building up and Knocking Down Trainwreck: The Women We Love to Hate, Mock, and Fear … and Why By Sady Doyle
Reviewed by Erin Matson

p. 31
The Glacial Pace of Change Equality on Trial: Gender Rights in the Modern American Workplace By Katherine Turk
Because of Sex: One Law, Ten Cases, and Fifty Years That Changed American Women’s Lives at Work By Gillian Thomas
Reviewed by Karen Pastorello