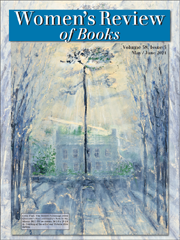 p. 4
From the Realms of the Ugly King Kong Theory By Virginie Despentes, translated by Frank Wynne
Reviewed by Hanne Blank

p. 10
Movers And Shakers Out of the Shadows: Six Visionary Victorian Women in Search of a Public Voice By Emily Midorikawa
Reviewed by Hannah Joyner

p. 18
See No Monsters Everyone Knows Your Mother Is a Witch By Rivka Galchen
Reviewed by Charis Caputo

p. 21
Salt In The Wounds Of Women and Salt By Gabriela Garcia
Reviewed by Lissette Escariz Ferrá

p. 23
A Novel Thriller The Other Black Girl By Zakya Dalila Harris
Reviewed by Eisa Ulen

p. 25
We Are No More The Trojan Women: A Comic By Rosanna Bruno and Anne Carson
Reviewed by Noelle McManus

p. 26
Big The Smartphone Society: Technology, Power, and Resistance in the New Gilded Age By Nicole Aschoff; Antitrust: Taking on Monopoly Power from the Gilded Age to the Digital Age By Amy Klobuchar
Reviewed by Claire Bond Potter

p. 28
Listen Up Orange You Glad
By Laurie Stone

p. 31
A Story Of Her Own Self-Portrait By Celia Paul
Reviewed by Cynthia Payne