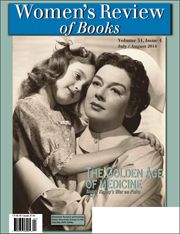 p. 5
The Gendered Politics of Seriousness Seriously! Investigating Crashes and Crises As if Women Mattered By Cynthia Enloe
Reviewed by Charlotte Bunch

p. 12
Leaders, Not Ladies He Runs, She Runs: Why Gender Stereotypes Do Not Harm Women Candidates By Deborah Jordan Brooks
More Women Can Run: Gender and Pathways to the State Legislatures By Susan J. Carroll and Kira Sanbonmatsu
Reviewed by Joanna Weiss

p. 16
Volunteering for Blackness Miss Anne in Harlem: The White Women of the Black Renaissance By Carla Kaplan
Reviewed by Cherene Sherrard-Johnson

p. 25
I Am His Other Know the Night: a Memoir of Survival in the Small Hours By Maria Mutch
Reviewed by Kelly Davio

p. 30
The Poet and Her Mother Holding On Upside Down: The Life and Work of Marianne Moore By Linda Leavell
Reviewed by Robin G. Schulze