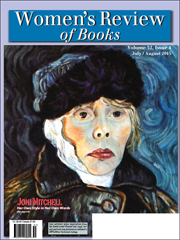 Complicating the story of women in the Nation of Islam A Nation Can Rise No Higher Than Its Women: African American Muslim Women in the Movement for Black Self-Determination, 1950-1975 By Bayyinah S. Jeffries
Women of the Nation: Between Black Protest and Sunni Islam By Dawn-Marie Gibson and Jamillah Karim
Reviewed by Juliane Hammer

Splitters, Knitters, And Quitters  School’s Out: Gay and Lesbian Teachers in the Classroom By Catherine Connell
Reviewed by Pam Chamberlain

Her Own Chair Joni Mitchell: In Her Own Words Edited by Malka Marom
Reviewed by Joanna Weiss

Black Women Reporters On The White House Beat  Alone Atop the Hill: The Autobiography of Alice Dunnigan, Pioneer of the National Black Press  Edited by Carol McCabe Booker
Eye on the Struggle: Ethel Payne, the First Lady of the Black Press By James McGrath Morris
The Presidency in Black and White: My Up-Close View of Three Presidents and Race in America By April Ryan
Reviewed by A. J. Verdelle